In all criminal prosecutions, the accused shall enjoy the right to a speedy and public trial, by an impartial jury of the state and district wherein the crime shall have been committed, which district shall have been previously ascertained by law, and to be informed of the nature and cause of the accusation; to be confronted with the witnesses against him; to have compulsory process for obtaining witnesses in his favor, and to have the assistance of counsel for his defense.

In brief, it guarantees certain rights to criminal defendants, including the right to an “impartial jury” of one’s peers. To remain impartial, jurors must reach their decision based ONLY upon evidence presented in court and ONLY with fellow jurors- that means no outside influence whatsoever. No discussing the case with the spouse, no blogging about the jury experience, no visiting locations involved in the case and absolutely NO GOOGLING!

But avoiding the temptation to Google, especially when we are accustomed to researching everything from what shampoo to buy to our upcoming blind date’s favorite football team, can prove difficult for inquisitive minds.

We recently conducted an anonymous survey to see how potential jurors would respond to the question, “If selected to serve on a jury, would you do outside research- on your own time- regarding the case?” While 66.67% understood that jurors, including potential jurors, were legally required to avoid exploring or discussing a case outside of the courtroom, 23.33% admitted that the urge would be too great, and an additional 10% were unsure whether they would do outside research. As one respondent admitted, “I would be very tempted. It is so easy to do that,” even though they recognized that it would be “unethical”. Another respondent stated that they would do outside research “to become familiar with all details from different perspectives”. Others said that, in certain circumstances, they would go searching for answers. For example, one respondent wrote, “So I know what they are not allowed to tell us, like when they say ‘objection, irrelevant’ I want to know WHAT was irrelevant? I’m gonna Google that right away!” 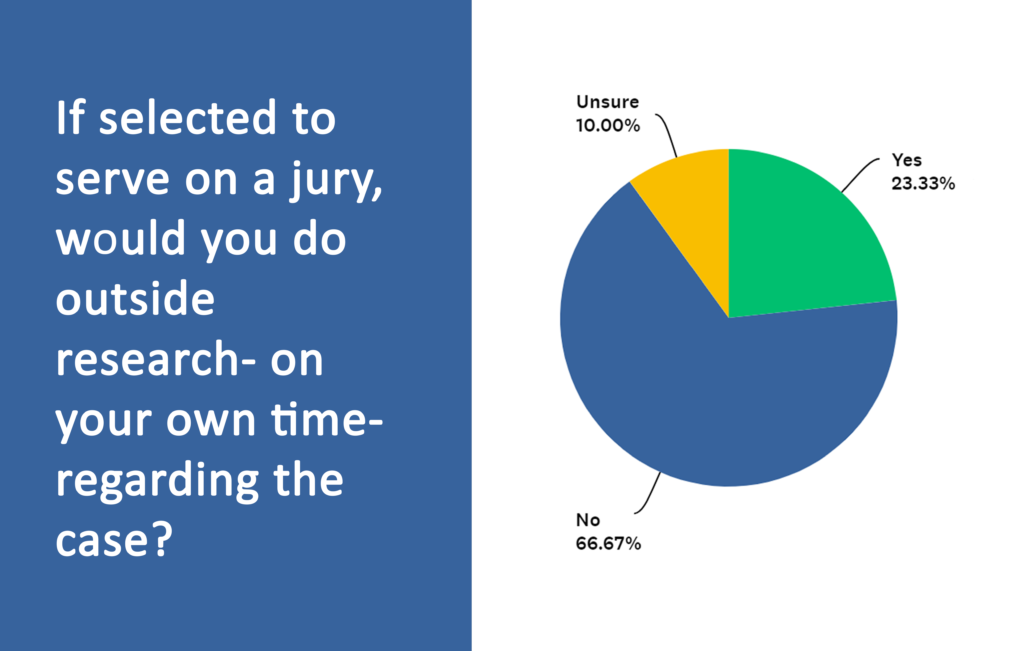 The problem of jurors doing their own detective work has become so prevalent, a new term was created to describe it. “Google mistrial”, coined by the New York Times, reflects the increasing number of mistrials caused by jurors seeking information regarding defendants, victims, lawyers, etc. online- some even going so far as to “Google Earth” crime scenes and conduct their own virtual investigations. Beyond sabotaging the concept of an impartial jury, having a case thrown out due to mistrial costs the court, and the many people involved, countless precious hours and often money.

So in this age of cell phones, tablets, and laptops, where boundless information is quite literally a click away, is it still possible to have a fair trial? Well, it boils down to individual willpower.